Really? Can someone tell me when they stopped being "Trailer Parks" and became "Affordable Housing Complexes"? Seriously... The news said it!

M and I can be seen at about 23 seconds in... She has the "Civil Right to Marry", and mine is the one that says "Equality is a Civil Right". Heh, I'm a dork. LOL Our buddy Liz is there too!

So... M and I did something I've never done before... We went to downtown Denver, and we participated in a protest/rally! It was to protest Prop 8, as well as to request/demand equality. I want to marry this woman who I love so deeply, who has been so good to me, and who I know is my soulmate.

I'm not a particularly political person, and certainly not someone who I'd call an activist, but this was just something I knew I had to be a part of.

The protest itself was peaceful, as hoped for and requested, and there were a grand total of 4, count 'em, 4, people protesting against the gay crowd. That was quickly reduced to two. Those two were young kids, in college, who, frankly, looked like a pair of little twinks, heh. In my one slightly-aggressive moment, I told them, 'You are only two, and we are thousands!" Heh. Later on, after we got back to the park, there was a bit of a crowd around the two, and sadly, when some friends and I tried to engage in a respectful dialog with them about their beliefs, it became quickly obvious that they were there to quote out-of-context Bible quotes and not really listen to what we had to say, so we told the crowd trying to heckle them to ignore them, not give them the attention they were hoping for, and folks did just that. They walked away. (not before the black woman in a biracial straight couple read them the riot act about how they didn't really know what love was, or a (jerk) guy grabbed the poster out of one of their hands and tore it up... Which, more than one of us apologized to them for... And not before classmates of theirs jumped up next to them and gave them huge hugs, heh. Classmates who were wrapped in gay pride flags, that is.) I hope those two boys figure out how to be happy without it being to the exclusion of other folks' happiness.

I can't speak enough about the positive energy that was with the entire crowd. We marched, MARCHED, up and down the 16th Street Mall, and the cops even stopped traffic for the crowd. It was really, really nice, positive, and despite what the news says, there were a good lot more than 1,000 people there.

M and I each had a poster of our own (note to self: if we do this again, we're getting damn sticks. My shoulders are going to be very, very angry tomorrow...) Mine had two message: "Equality is a Civil Right", and "How can you H8 love?" I didn't want anything too 'in your face', because that's not what it's about. It's about equality, equal respect, and equal rights, that's all.

As soon as we can get them off of M's iPhone, I will have some pictures posted. :-)

I just... I don't know what to say. I'm agnostic, so saying, thank God, thank Allah, thank Athena, thank Jupiter, thank Yahweh... None fit, but... Thank you. Whatever is possibly running things out and above, thank you. I prayed, or sent good thoughts as I like to say, your way, and thank you. That thank you might go to the folks who voted all over this country, it might go to all of those all over the world in so many countries who hoped for this, I don't know. But, thank you.

My faith in this country, both as a people and as an international citizen, seems to have reared its head again.

I am... grateful, for lack of a more powerful word, that the US is not so backward and so far into the religious right's pocket that we were unable to do what needed to be done. Thank goodness. We may be a young country that's gotten too big for it's britches, but once again, we have hope and we have potential.

That all said... I'm very saddened by the current state of Prop 8 in California. The fact that hundreds of thousands, if not more, have people prayed on the side of hate and segregation saddens me, but not as much as the fact that it could still be voted in. That said, we're only at about 26% reporting at this writing, and the presidential election has given me hope, perhaps irrational, perhaps not, (and I vote for 'not') for the future. It took, what, roughly 65 years (give or take) for us to go from segregation to a black man being president? Perhaps in my lifetime, I will be able to legally marry the love of my life, one of the best people I've ever known in my life, and when that day comes... All are invited.

In the meantime, let's have a HELL of a party! 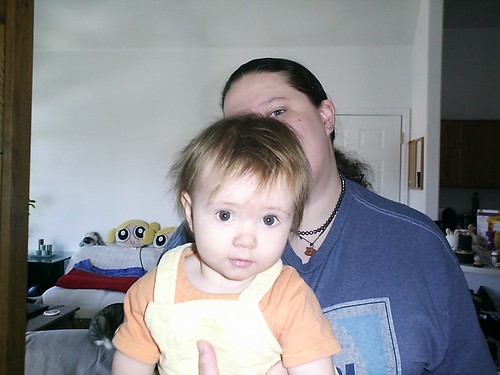 Absolutely nuts over this kid.

Robert Jordan died today. I had no idea until I saw that posted on another friend's LJ...

For those of you who know who that is, and why that matters, you know why I'm sad today.

Following a link from Fark.com, I was led to an article on the artwork of a "Microartist" named Willard Wigan. It's absolutely amazing, I think.

This man makes sculptures that fit on the head of a pin, or in the eye of a needle, literally. Pretty boggling.

For you knitter types, here is a pretty equally boggling link that my sister sent me in response to the video. :-) Teeny, tiny knitting!

This is a very brief blurb of an IM convo my sister and I had today... I'm "Lanfear95", she's "krapsnart" (look at it backwards).


I love my sister.

How evil are you?

This could certainly lead to some interesting discussions...
Collapse